The Soul of Wit, and Vice-Versa 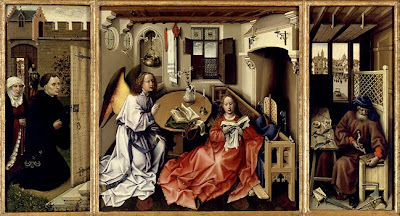 Preparing to preach on Sunday's lesson -- the oneiric "annunciation to Joseph" -- we found ourselves re-reading Augustine's Sermon 263, on the Ascension.
Yes, the Ascension -- not the Annunciation. You may wonder why, and well you might. The connection isn't clear, but it is worth making. One of our favorite paintings is the "Merode Altarpiece" by Robert Campin, which hangs in the Cloisters. We have admired it for rather more than thirty years now, first for the startling clarity of its color and perspective, and later for the depth of its theological symbolism.
It is a triptych, in the venter panel of which, Mary hears the good news of her pregnancy. Among other symbols, a candle -- burning, oddly, in the daytime -- has just been snuffed out. Most likely, a reminder that in this moment the eternal Son has set aside his majesty and condescended to be made flesh. Nice, huh?
What excites us almost as much, though, is the right panel: Joseph in his workshop. For centuries, art historians puzzled over the strange little boxes that Joseph was building. In 1945, Meyer Schapiro published a now-very-famous article identifying them as mousetraps. At which point, to scholars of the later Middle Ages, the symbolism became clear, because it occurs in other places as well.
The mousetraps are a reference, at least indirectly, to Sermon 263, in which Augustine writes that "Muscipula diaboli, crux Domini; esca qua caperetur, mors Domini." Roughly put, "The devils's mousetrap is the Lord's Cross; that bait which captures him, the Lord's death." And so Joseph, with his decision to raise and guard the unexpected child, helps to bait the trap which will spring at last on Good Friday. (Feel free to mention that tomorrow, if it comes up).
Anyway, we are always forgetting the source of this image, and then finding it again with a Google search -- which means that we look over Sermon 263 each time, once or twice every year. We only have it in Latin, which we read slowly and inaccurately, but even so the sermon (like many of Augustine's) is a marvel.
It is about 500 words -- roughly half the length of our average own usual Sunday sermon, and ours are fairly brief. But into those 500 words it packs an enormous amount: the Bible, the liturgy, the history of salvation, and the meaning of the Ascension and the hope of the Second Coming. Even with less content, the package itself would be remarkable, because it is easy to forget what a stylist Augustine was. His phrases are terse, epigrammatic, and infinitely quotable -- like Tertullian, but without the heresy.
Posted by Father Anonymous at 4:32 AM

You say Ascension twice. Do not you mean Annunciation, sir?

No! The sermon is on the Ascension, which is part of what makes it so marvelous. Of all the great feasts, here is the one that most threatens to draw the imagination away from Jesus as flesh and blood -- and in the middle of his sermon on the subject, Augustine fires off one an image that ties together the Incarnation and the Passion.

I really can't say enough about this sermon, or about one of his others on the Great Vigil of Easter, to the effect of "We keep watch, and the world keeps watch. But we are waiting for one thing, the world for another."