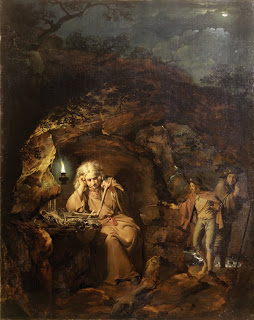 If you're lonely at Christmas, Science Daily proposes a forgotten remedy:  pay a religious zealot to live in your garden.

Apparently, back in the 1700s, this was all the rage.  Rich people would pay a hermit to live austerely on their property, moping about in the yard, growing long beards and presumably praying a little now and then.  It wasn't about company so much as, well, decoration:

In the 18th century, it was highly fashionable for owners of country estates to commission architectural follies for their landscape gardens, many of which included hermitages comprising of a small cottage, cave or contemplative gazebo.

Often, landowners would inhabit their hermitages with imaginary or, in some cases, real hermits.


(And yes, the imaginary ones are the origin of the humble garden gnome.)

The hermit might be engaged for a period of seven years, after which he would be paid enough money to ... retire.  Which isn't the sort of thing we imagine hermits doing, but whatevs, yo.

The expert here is Gordon Campbell, author of a nice little book on the King James Bible and also of a recent book on ornamental hermits.  Campbell explains that decoration wasn't the only motive; there was a sort of vicarious spirituality involved:


It meant that the busy CEO could outsource his melancholy, contemplative side, embodying it in a hermit for hire. The ideal of living frugally did not therefore inhibit the good life. It's a bit like bankers carving turkeys for the homeless on Christmas Day.

Posted by Father Anonymous at 10:51 PM